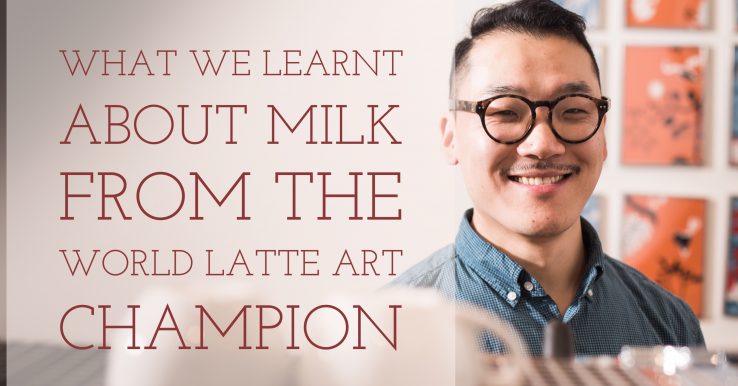 We were fortunate enough to host World Latte Art Champion Caleb Cha here at HG Coffee School last week and we can certainly see why is a champion! Caleb presented the science of milk foam and got us all behind the espresso machine to work on our latte art skills in a series of practical workshops.

Three fun filled days (primarily fuelled by coffee!) were packed with tips and interesting information from the World Champ, and we have laid out some of the most important points in the discussion of milk, you’re welcome!

It all comes d 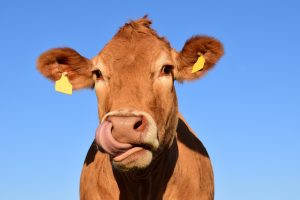 own to milk, most coffees are composed of about 60% of it at least! Because it is such an integral part of espresso beverages the science behind how it acts in a cup of coffee is pretty important… you certainly can’t pour latte art without it can you?

The most commonly used milk is cow’s milk. Cow’s milk is a complex mixture designed to nurture and sustain life itself for new-borns and packed with vitamins, sugar, fat and proteins.

The nature of milk is very dynamic as a consumer product, changing structure throughout the year as any dairy farmer could tell you. A cow’s lactation cycle will change over the four seasons, the general climate will change and also what the cow is actually fed. All of these factors will affect the taste of the milk and how it behaves – especially in the hands of a barista armed with a steam wand.

The biological components of milk make a big difference on the taste, volume and density of milk and its microfoam.

Milk sugar, otherwise known as lactose, is the primary source of milk’s sweet flavour. Normally it is relatively insoluble, so we baristas must introduce heat in order to break it down and disperse it throughout the milk. Regular whole milk contains a healthy dose of fat that adds the sumptuous creamy mouthfeel and body to the liquid, it is not uncommon for people trying low fat milk for the first time to find it little more than drinking white water.

Skim milk does however, produce slightly greater volumes of foam even if it is missing the richness and body in that of whole milk. On a more practical level whole milk still performs perfectly well in the production of good microfoam. For the benefit of extra body, flavour and richness to a coffee, whole milk is the winner and will showcase the best drinking experience when paired with fresh espresso. I would only use skim milk on a customer’s request as it doesn’t provide for the potential richness and mouthfeel that whole milk does.

When looking for a milk that has superior flavour you might find milk that has a thick layer of cream forming on its surface – in short, an un-homogenised milk. Most cow’s milk is homogenised by passing the milk through a very narrow valve at high pressure and heat to integrate and disperse the fat globules throughout the milk. This process also helps dairies filter out excess fat molecules to create 1%, 2% and skim milk.

Proteins in milk are often the subject of discussion amongst more experienced baristas chiefly because we know it is protein that lends the most weight in the steaming process. This is where the talk of milk and its interaction with coffee gets heavy so running the risk of upsetting food technologists, my aim here is to simplify things down a little…

There are two types of protein present in milk, casein protein constituting approximately 80%, and whey protein making up the remaining 20%. Casein is the major facilitator in the foaming process forming a stable film around air bubbles introduced by the steam wand while whey strengthens the stability of the bubble walls allowing beautiful long lasting microfoam. The reason why we create microfoam early in the steaming process is due to casein’s effect on bubble stability, around 60° Celsius the protein will denature rendering it useless!

This is also why re-steaming milk gives us such average results and why fresh milk with its army of protein must be added. Most will find that adding fresh milk to preheated milk will still give average results too, and though it may be more economically favourable to business owners, commercially they may still suffer through an inferior tasting product and a slow decline in customers.

This practice should be avoided! Caleb would agree it is better to use smaller milk jugs and only heat as much milk as you need for your immediate coffee orders to reduce wastage. You’ll find, too, that you’re chance of pouring great latte art will also increase.

Learn what it takes to learn latte art and become a champion in our article with World Latte Art Champion Caleb Cha here!

What happens to milk during the steaming process?

Once you’ve chosen what type of milk to use its time to unlock the secrets to exactly what happens to it and why! Read on..

So far, we know the introduction of air into milk through the steaming process will lead to the liquid becoming infused with a tide of air bubbles. For the purpose of stretching milk for coffee; this air needs to be stabilised and organised for the best effect: smooth, rich and creamy microfoam. As we discovered above, all varieties of milk contain more than enough protein to form this microfoam, and during the steaming process, fat globules come into play as they liquefy under the heat and absorb the protein coated air bubbles.

Surprisingly, Caleb informs us that fat is also the major cause of DE-stabilisation in milk foam! It has been observed that fat’s effect of breaking up the microfoam is particularly apparent at temperatures between 10°C and 40°C. Up to this temperature range the fat globules are in a more solid state like firm butter, but as the milk is heated the liquid fat from the globules resembles a free-flowing state like that of melted butter easily spreading on hot toast. In the milk once fat has melted around temperatures of 40°C and above they quickly work to coat the microfoam.

The naturally occurring enzyme lipase also acts upon fat globules in a degrading process called lipolysis; where mono and diglycerides (a glyceride consisting of one or two fatty acid chains) will act to rupture the proteins on the surface of our microfoam. Lipolysis can also be responsible for the sour taste in milk.

What milk to choose?

There are always a variety of milks available commercially and each of them will impart different characteristics to freshly extracted espresso.  As a rule with milk and most other things in life, you get what you pay for. We always suggest that you match your milk to your coffee for the best flavour combination in the cup as different milks can enormously affect the flavour and the wonderful – or terrible – fusion that will occur between coffee and milk. 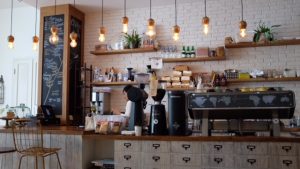 Café owners and baristas certainly need to consider the quality of their milk and the pairing of this with their chosen blend(s) of espresso otherwise they’re not serious about the quality of the coffee they serve their customers. Though price will always be a consideration in the purchase of milk, business owners can no longer accept that it is the only consideration!

Stay tuned for Caleb’s Top Tips for perfect milk foam in our next article!

Peter is the Director of HG Coffee School, a cafe owner, businessman, consultant, husband and father to three energetic children! With many years of experience in the coffee industry and owner of several cafes of his own, Peter has coached many new business owners in building their dream business, judged barista and latte art competitions at the national level and continues to coach and train thousands of new baristas through the coffee school each year. To read more of peter's writing visit  www.thehospitalitycoach.net To get in touch with Peter about maximising your business' potential email info@hgcoffee.com.au now!

Thanks! Your message has been sent.

Have your training registered with The Department for Education and receive your nationally accredited Statement of Attainment.

We only recommend this for those who will likely undertake in further study in Hospitality ie. Certificate I, II, or III in Hospitality Management.  In doing so you will have recognition of prior learning in this unit.

If you’re learning to make coffee for employment this upgrade is unnecessary, as employers only interview and employ against your ability to make good coffee.

We can register your training for just {UpgradePrice}!

No additional training or examination required

Would you like to add this to your order?